The fuel crisis is a world-renowned problem and the search for alternative sources of energy is of high necessity currently. Biodiesel is an excellent option as it theoretically gives overall zero carbon emission and just needs a few modifications in the current engines to work as fuel. This article analyzes the process for producing Biodiesel from oils. It uses a mathematical model for simulating the reaction and optimizing the Bio-diesel yield. Further, an approach to generalize the process of parameter tuning and optimizing the yield for any oil is discussed in the paper. The main aim is to develop a framework that can be integrated as open-source software for biodiesel optimization of any oil with just one calibration dataset.

The reaction of oil (TG) and solution of KOH in methanol (M) proceeds according to a simple stoichiometric equation:

The reaction of rapeseed oil (RO) and solution of KOH in methanol (M) proceeds according to a simple stoichiometric equation: RO + 3 M = G + 3 E (1) With G = glycerol and E = methylic esters of RO biodiesel. However, the physicochemical mechanism of the reaction is complicated because:

In this work, we consider chemical reactions as the determining reaction parameters. Nevertheless, it was necessary to presume several simplifications. However, all of them have a real basis, as will be shown in the following.

For the theoretical processing of the mechanism, we assume that:

We presume a reaction scheme with two sequences of consecutive competitive reactions. The first sequence describes the main part of the process – namely methanolysis of TG to methyl esters, the second describes the side reaction – saponification of glycerides and methyl esters by the catalyst to potassium soaps. The reaction scheme is expressed by the stoichiometric equations (2-12). In the equations following abbreviations are used: 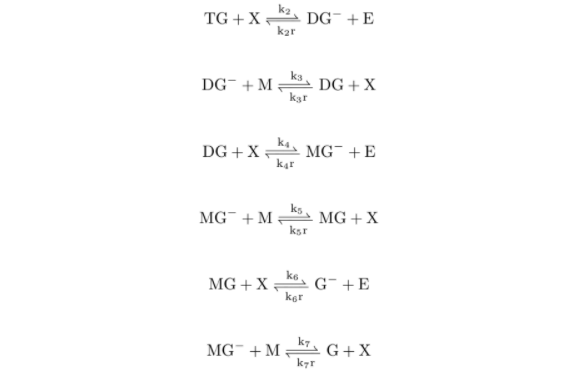 The irreversible step is the reaction with ki, i.e. ki, kir (at a given pressure and temperature). Its final state is characterized by the practically full exhaustion of the reactant with lower initial concentration. The scheme presumes that methanolysis of TG to G is catalyzed by methoxide X which is primarily formed by the methoxide reaction and regenerated by the reactions of Methanolysis with anions of diglycerides, monoglycerides, and glycerides (DG–, MG– and G– ). According to the methoxide equation, an important influence of water in the reaction mixture must be expected. The methanolysis proceeds in a liquid medium (i.e. at a practically constant volume) and at constant temperature and pressure. Therefore its common kinetics could be described, with respect to the rules of the formal reaction kinetics for the isothermal-isochoric reactions, by means of the molar concentrations I of all 13 assumed reactants M, OH, X, W, TG, DG–, E, DG, MG–, MG, G–, G, and A, thus by a system of 13 differential kinetic equations of the type concentration-time d[I]/DT = … . For the solution of kinetic problems, it is advantageous to express the amounts of the reactants in dimensionless relative concentrations. In our system of rate equations, the initial concentration of TG, i.e. TG = TG = a, was used as the norm for all reactants except M, X, and E.

For these components, the initial concentration of M, i.e. [M]o = b was chosen as the norm. Thus, the following relative concentrations with the values in the interval (0; 1) were defined as follows:

However, it is known that in such complicated reaction schemes rarely all reaction steps influence the real reaction rate to the same extent. Generally, some of them are dominant with respect to their great or small velocity in comparison with the other steps. We assume the same in the proposed scheme for the following reasons: 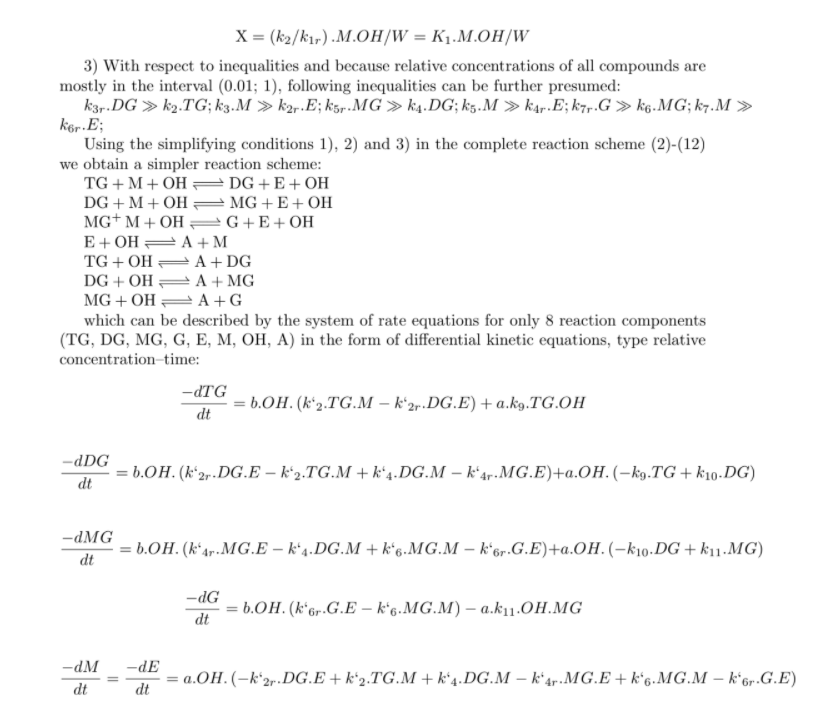 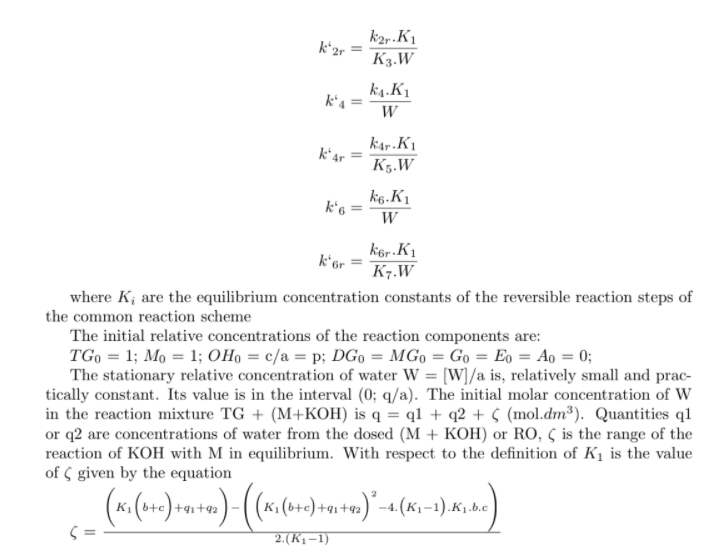 The mathematical model has been coded in MatLab and has been validated against the experimental data. The code can be found here.