We have five basic senses that we rely on primarily. These sensory inputs, namely audio, video, feel, smell, and taste. These inputs are the primary source of information for our brain, which then processes this information and develops an estimation of the body’s state and its environment. These sensory inputs coupled with our CPU, brain, help us make important decisions. If we want to provide the machines with the ability to make decisions based on their perception of their surroundings, the first task at hand is to identify the key sensory inputs required to gather the required intel. In this article, we will explore different characteristics of sensors that are important for their usage. Then we will explore some sensors based on their characteristics.

As an exercise, I am leaving it on you to identify the sensor characteristics for each of the sensor examples provided below.

This is the 0/1 Digital output signal that is used for simple on/off switches in several circuits. The use of this kind of sensor is fairly common. A few variations of regular switches include long-press switches, multiple-click switches, etc. These can also be used for touch/bump sensing, but the main problem is that we can’t record the force.

This is an analog output signal that is used for measuring the force applied to the sensor. The sensor is packed with resistances and as a force is applied, the resistance of the resistors changes. This leads to a change in voltage proportional to the applied force.

These use a known mass attached with spring to measure the net force, which is then used for measuring the acceleration by F = m*a. These come with some issues of their own. As can be easily guessed, the vibration of the moving mass, which should not affect the acceleration component, will impact the measurements here. Furthermore, the temperature also affects the readings and might create a bias in the readings. Considering the relation, a linear error in velocity will lead to a quadratic error in position. Considering a car using the accelerometer, improper placement and handling of accelerometers can lead to catastrophes. 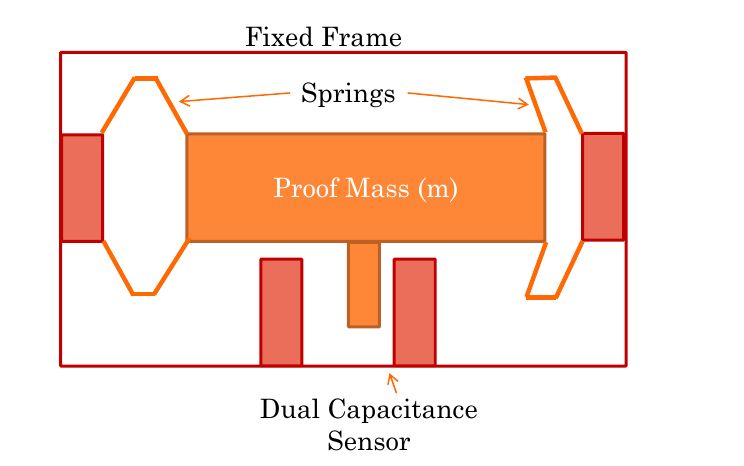 For measuring the frequency, a frame is placed around the mass, which gives capacitive change measurements.

The issues for accelerometers also plague the gyroscopes and thus appropriate noise and bias modeling are required.

The idea is to use the earth’s magnetic field to provide inertial orientation. This has good precision but not-so-good accuracy. A major issue with these types of sensors is the interaction with surrounding objects such as metals, current, and magnets. Furthermore, the sensor is absolutely useless indoors.

These are active sensors that emit sound pulses and measure the time of their return. These sensors are usually used in underwater applications due to high speed and low regular turbulence. An important limitation for the usage of this sensor is the limit of the range. Within any medium, when a wave travels, it faces resistance and losses its energy. For measurement, the sonar pulse should reach back. Thus this is mainly used for measuring the depth of the ocean, which has a set fixed depth and the senors can be calibrated to accommodate the requirements. Another minor limitation of this sensor is the inability to direct the pulses. Thes pulse of SONAR is approx. 20 Deg wide and hence, one must be careful with multiple SONARs. Due to the data loss and/or multiple echoes, the data from SONAR almost always have false echoes and missed readings. Appropriate post-processing accompanied by a human operator is required for using this sensor.

Working similar to the SONAR emits an infrared beam and measures the angle of the reflected beam to triangulate the distance to a surface. The infrared from the environmental sources can be easily removed by selecting a frequency on which our sensor operates, which is unique to the sensor only. The sensors are the most preferred for range sensing due to the less amount of possible environmental noise sources. An array of photoelectric sensors are used for sensing the incoming beam. The sensor’s main weakness is the limit of the sensing range, which mostly goes only up to 1.5 m.

As the surface moves closer, the dot on the CCD moves up, and the focal plane moves away. This also leads to a minimum range that can be sensed using the IR Ranger, i.e generally around 30cm.

More on Sensors in their individual articles.